On 6/15/08, there are access problems with Scalzi.com, relating to the fact that my host provider (1and1.com) is being blocked by a number of ISPs for not particularly good reason as far as I can see. Which is to say that the site is up, you just might not be able to get to it from your ISP. Who knows how long this tomfoolery will last.

So, I reinstalled MT4 on my site (after uninstalling it and the previous MT installs as well), and it appears to be a great deal more stable than the previous install. So that's good.

However, I've also decided that right now is a good time for me to take a break from Whatever for a couple of weeks. To be blunt about it, I'm feeling a little burned out, which is not a good thing when I'm working on a novel and re-editing my astronomy book. Every now and again the Whatever feels less like fun and more like an obligation, and this is one of those times. That's when it's smart for me to stop and take a vacation from it: Not too long, but long enough that I can take care of some other business and also not worry if I should be posting about some damn thing or another over there.

I used to take a month or two off from the Whatever on a regular basis, but I haven't done it in the last couple of years primarily because the readership has increased so much over there, and I've gotten caught up a bit in continuing to grow those numbers, which means constant tending. However, at a certain point it becomes silly, and I just need to take some time off. If some portion of the readership wanders off permanently because I've taken a two-week break, well, that's fine. There's only so much dancing monkey I have in my system, anyway. But I don't think two weeks is long enough for people to forget. They'll remember when I pop back up on their RSS feeds anyway.

In any event -- officially on Whatever hiatus... now.

The pictures of the newly-groomed Kodi that were on the Whatever earlier today:

Incidentally, all the Whatever entries, etc., are still up on the Whatever; they're all static pages, so they didn't go away when I deleted the MT install. However, they do lack some formatting and you can't post comments. That's the way these things go. 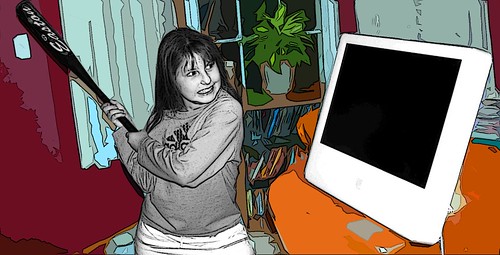 So, yes, I'm having continuing problems with my new Movable Type installation. As I noted on the site, it keeps throwing up 500 Internal Server Errors for no particularly good reason -- it seems like MT4's rich text entry editor is insanely finicky and if you try to do anything other than what it wants to do, it will punish you severely. Since I can't seem to get to to not do that, I'm going to uninstall MT4 (after exporting what I have) and all other previous MT installs and then try again, although this time I'll probably do some fairly extensive test blogging away from the Whatever site first. While I'm doing that, I'll be writing my regular load of entries here.

I don't know how long that will be -- could be a day, could be a week, who knows. But I left a trail here (or am about to), so hopefully people will click through.

As for MT4, I'm annoyed with it but I'm willing to believe that at least some of the problems are because of me, not the software, which is why I want to try a totally clean install and see what happens then. I know at least one Six Apart principal is watching me thrash about and has offered help, which is awfully nice of him; I may take him up on it yet, but I want to see if I can figure it out first. I like what I've seen of MT4's functionality; I just want it to function for me for more than six hours in a row without breaking. We'll see what happens.

God only knows how I manage it. The back end installed just fine; it's the front end that's the issue. When I try to post an entry it gives me the following error message:

Statement has no result columns to bind (perhaps you need to successfully call execute first) at /..../mt4/extlib/Data/ObjectDriver/Driver/DBI.pm line 120.

Who knows what that means?

Anyway, I'll fiddle with it some more and see what happens.

My host provider is having systemwide issues at the moment, so Scalzi.com and a whole bunch of other sites are down. Hopefully it should be back up soon. Yay! It's not my fault this time!

I have the Whatever up and running again (mostly) and so will resume posting there.

My AOL Journal is also currently down.

It's a conspiracy, is what this is.

(Still fixing the Whatever. In the meantime, here's what I was going to post there this morning)

Indeed, claiming a macho film friendship is not-so-secretly gay has become its own kind of silly convention, a fake-subversive cliché. It is better—sounder both aesthetically and sociologically—to view the masculine pathos in films like Point Break in light of the tradition of heroically minded philosophy that runs from Aristotle to Nietzsche. If Point Break is homoerotic, in other words, then so is Hegel's Phenomenology of Spirit.

Well, and it is. All the major Western philosophical tracts are, like, totally gay, right from the moment in Crito when the dying Socrates reminds his friends that he owes a cock to Asclepius. Philosophy never got past that. Consolation of Science? Gay. Summa Theologica? Practically swishes across history. The Praise of Folly? Glam. The Prince? Clearly meant to be read in S&M bars. And let's not even talk about Nietzsche's The Gay Science. Because, come on. It's right there in the title. I don't even know why this is a question.

More seriously, however, reaching all the way back to Nietzsche and Aristotle to explain why Keanu and Patrick are not, in fact, planning to cock fence each other at the soonest opportunity is completely unnecessary, the middlebrow cultural commentary equivalent of going after a fly with an axe. There are several places to go before you have to hijack Western philosophy for such a meta-exercise. You can talk about director Katheryn Bigelow's stylish-but-straight directorial canon, the camera gaze of Point Blank focusing more on the action in the film than the hunky, hunky bodies, or the fact that while Keanu or Patrick individually may generate tasty waves of homoerotic delight, placing both in the same film makes them cancel each other out, leaving you with nothing but a bland and depressing straightness that not even Lori Petty's butchtastic presence can dent. Any of these work without having to drag poor closeted Hegel into it.

And as for the "macho = homoerotic" thing, both in film and in general, well, let's just chalk that up to the fact that at this moment in the history of our nation straight men have ceded everything but snarky T-shirts, Xbox 360, leet speek and the classic geek pear shape to the men of alternate sexualities. A good-looking man in text-free clothing, speaking about something other than the iPhone? Gay. Two such men engaging each other in a way that does not have a WoW server as an intermediary? Super Gay! 300 such men, fighting Persians in jock straps and capes? Super-Mega-Ultra Gay! You don't need to drag all of Western philosophy into the discussion, when the present heterosexual male abdication of anything more culturally, emotionally and intellectually resonant than "Dick in a Box" works just as well.

Going back to Aristotle and Nietzsche, Western philosophy's cute couple, a good and general rule of thumb is that, unless you are having a discussion about philosophy, if someone starts trying to link the topic under discussion to the superstars of Western thought, you should probably have your internal Mr. Sulu raise the Pretentious Twaddle Shield to maximum and then brace for impact. It's not that the fellow is wrong (Feeney's overall point that macho is not automatically homoerotic is largely correct), it's just that going there is probably unnecessary on the rhetorical level, and the only reason to do it is to impress an editor or to show off to your conversational partner that, indeed, you got one of them there edumacations (showing off your book learning? That's so gay). It might seem impressive at first blush but what it really suggests is a certain lack of rhetorical sophistication, and the lack of awareness of every cultural thing between the quotidian subject under discussion and the giants of philosophy. Something inbetween is likely to be more relevant and on point.

In short: Dragging philosophy into the discussion is not always as effective as you might think it is. Just because Ayn Rand ran to Aristotle for every little thing doesn't mean it works for everyone. Hell, it didn't actually work for Ayn Rand. Let's not get into that now. Although I will say this: if Howard Roark and John Galt ever got together, that would be hot.

The header says it all. I'm trying to fix things; in the meantime I'll be posting here if I need to.

Update, 11:30am: Maybe this has something to do with it: 13,363 junk comments in the 24 hours before the database broke.
Collapse